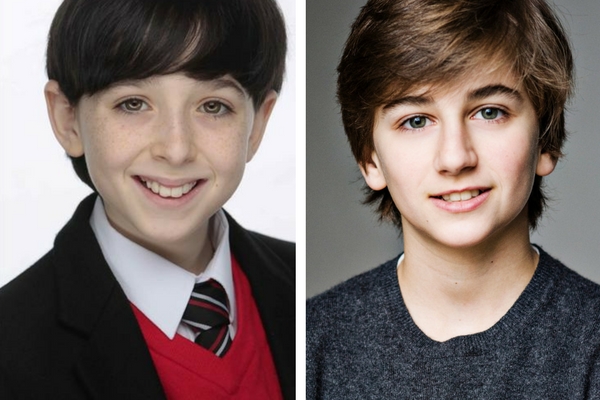 As we announce the full cast joining Darren Day, Michael Xavier and Jessica Martin for BUMBLESCRATCH‘s special gala charity concert at the West End’s Adelphi Theatre on Sunday 4 September 2016, we’re particularly excited to reveal that twelve-year-old Ilan Galkoff has been cast as the lead child role of Perry – a part he’s already familiar with…

This is the role which was created in the 2013 workshop by Sebastian Croft, now a rising screen star whose current television credits include Game of Thrones (Young Ned Stark) and Penny Dreadful. Sebastian recently helped announce BUMBLESCRATCH’s West End premiere with our exclusive video announcement on this site and, in June, reprised songs from the show at West End Live.

Ilan and Jessica in Elf The Musical

Sebastian will be in attendance at the West End gala on 4 September to cheer on Ilan, who he’s previously performed onstage with in Oliver! Ilan’s other credits in the West End include Elf The Musical (in which he played the son of Bumblescratch co-star Jessica Martin), Matilda, Oresteia and I Can’t Sing. He’s also been seen this year in Welcome Home, Captain Fox! at the Donmar Warehouse.

On the casting of Perry, Robert J. Sherman said:

“’Perry the Plague Rat’ was my initial inspiration for BUMBLESCRATCH and the first character I created. He’s an orphan child and a catalyst for the journey through London that the title character, Melbourne Bumblescratch (Darren Day), takes us on.

“For the workshop of BUMBLESCRATCH in 2013, we auditioned 50 boys; amongst the three called back were Sebastian Croft, who we later cast, and Ilan Galkoff. Ilan was terrific – he sang like an angel – but at that point he was too young. I’ve stayed in touch with his family and asked him to audition again this time. He’s now the perfect age to take on the role, plus he really looks the part of this vulnerable street urchin, is a pitch-perfect singer and a wonderful actor with an incredibly impressive CV for a 12-year-old. I can’t wait to see him play Perry.”