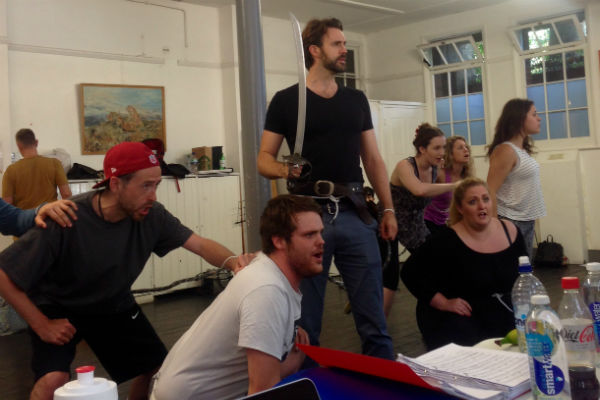 As the first week of BUMBLESCRATCH‘s rehearsals wrap, Robert J Sherman’s production assistant Thomas Josling updates his behind-the-scenes account of putting the show together. You can read part 1 here. Check back for more rehearsal diary updates in the lead-up to opening night on Sunday 4 September…

It really is sweltering now, but we’re working twice as hard. We started off the day staging the number “Can You Hear the Music?” with Ilan Galkoff and Darren Day (Perry and Melbourne). It’s sounding truly beautiful from over here. Maybe this is my favourite song. Next up, the ensemble transformed into the “underdwellers” for the spectacular (and spectacularly complicated) number “Storyteller”. This also proved a good opportunity for everyone to try on their “training tails”. Believe it or not, dancing with rats’ tails comes with its own rather unique challenges. The afternoon consisted of Melbourne’s emotional ballad “Music of the Spheres” – a leading man indeed.

This morning brought together the utterly “Adorable” (cue song) Perry (Ilan Galkoff) and Thamesa (Cathy Read). Staging the numbers “What Is This I See?” and “And One Day” made for a heart-warming rehearsal. We finished the day with the biggest sing in the show, “My Place in the Sun”. We’ve heard Jessie May sing her top-B several times this afternoon, but it’s still hugely impressive. The props for the show have also started to arrive through our doors – some of which are a little exciting. Michael Xavier (pictured above) will no doubt have to brush up on his sword-fighting skills, as Hookbeard’s sword is no less than a hundred years old.

We started today with the staging of “Socrates’ Scorn” with the wonderful (and slightly terrifying) Jacob Chapman. As with every great antagonist, his songs are nothing less than gigantic – and Jacob has the range. After being hidden away in his solo music calls, finally he’s here in the main rehearsal room!

In the afternoon, we’ve been recapping all the numbers staged so far and ‘putting it together’. We finished the day, in true Friday style, with a cake to celebrate Ilan Galkoff’s Bar Mitzvah. Of course, it was in the shape of a rat. The icing on the cake – literally – was the writing underneath (credit to Robert J Sherman):

I can’t believe we’re almost at the end of our first week of rehearsals here at Union Chapel. We may be at the half-way point, but we’re well on track to make something really special. We dove straight in this morning staging Melbourne’s (Darren Day) number “All Fallen Angels” – an emotional turning point in the story where Melbourne attempts to convert the fiendish Socrates to the side of religious good. After lunch, we tackled the numbers “News of Thamesa’s Imminent Demise” and Cathy Read’s (Thamesa) “Beautiful Now”, which is sure to break even the hardest of hearts. The mood was soon brightened by Michael Xavier and Darren Day in the hilarious “I Cannot Hear You”. A ghost-pirate who’s afraid of graveyards – you make your own conclusions.