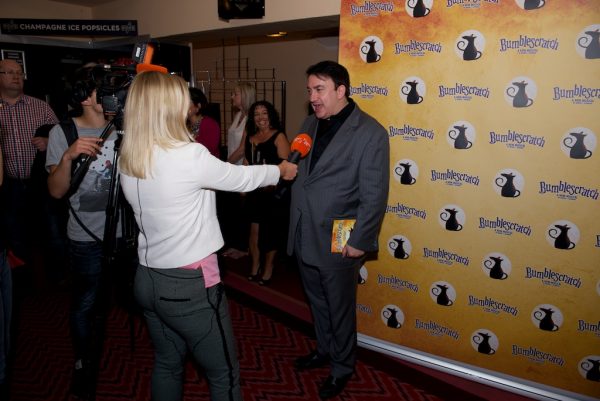 In the third and last instalment of our rehearsal diary, Robert J Sherman’s production assistant Thomas Josling updates his behind-the-scenes account of putting the show together in the second week. You can read part 1 of Thomas’ diary here and read part 2 here. Here’s what was involved in show preparations in the final week, day and hours leading up to the gala night on Sunday 4 September…

Here we are ready to start week two of rehearsals. We started with the staging of “Bumblescratch Nightmare” – the development of Melbourne (Darren Day) eating some “bad cheese” and experiencing terrible hallucinations. After lunch, we set the number immediately before this – sometimes we’re not so lucky as to be able to rehearse in chronological order. We finished off the rehearsal with the ensemble, Darren and Jacob Chapman (Socrates) as we went through “We Will Live To Be Free”. Teddy Moynihan (playing the role of Squabbler) does an incredible patter section, that only seems to be getting faster with every run-through.

With just five days of rehearsals to go, we’re all on schedule and are already recapping a lot of the staging that’s been set over the last few days. Some new setting today was “Socrates Presents His Plan” and “Blackness Fills the Night” – I’ll tell you that darker endings are always fun to set. In the afternoon, we were joined by fight director Paul Benzing to set a swashbuckling sword fight as part of the number “Let Us Pass” with Michael Xavier and our “Ravenous Rats”. The secret to a great fight scene, as any stunt enthusiast will know, is solid (slow) practise. I’d certainly rather them than me.

At this point, we’ve started to recap and join together larger sections of the show, and it’s looking great. Although there are still four days before we descend on the Adelphi Theatre, this is actually our last day before rehearsals are exclusively reserved for running the show. In anticipation for Sunday, London Live television came in to interview some of the cast and creatives and get some shots of the cast in action. (They came back on opening night and got an interview in the theatre foyer with Robert J Sherman – pictured above.)

This morning we put together the show in its entirety, ready for our full run in the afternoon. It’s fantastic to see everything flow chronologically for the first time. After lunch, the rehearsal room was jam-packed full of the entire BUMBLESCRATCH team – lighting designers, sound operators, visual designers and all. We ran the show the whole way through with a short break between acts. Bringing it all together in front of so many people created quite a buzz to the room, which I’m sure will only grow from here over the coming days. After an hour-long note-taking session, we’re all ready for a stiff drink at our cast and crew meal.

The cast are ready to get a day of rest today (and much-needed, I’m sure). Meanwhile, the orchestra are here and ready to make magic. The perks of working in the rehearsal room are aplenty, and today I get a free concert. For those of us lucky enough to hear them, we were blown away by their incredible sound. This, of course, is credit to orchestrator Rowland Lee, who truly knows how to get the best out of his musicians. Credit also to percussionist-extraordinaire Matt French, who has his work cut out for him with what seems like an impossible number of instruments written into his part. Two days to go!

Unbelievably, it’s our last day in the rehearsal room before we move into the Adelphi Theatre for the big day tomorrow. After the excitement of yesterday’s band call, things became even more thrilling as we brought together both the orchestra and the cast (and twenty crew members) for the Sitzprobe. This traditionally is the first run-through of the show’s music with both actors and musicians together, usually for the focus of the music. This being said, as our show is through-sung, it’s no small task! In the afternoon, the cast completed their final run of the show in some items of costumes before the technical and dress rehearsals tomorrow. We sailed smoothly through, and now we’re ready for the Adelphi.

The culmination of two weeks of sweat and incredible work presents itself tonight, and although well prepared, we have a lot of work to do before we open our doors at six o’clock, and with that a long day ahead. The crew arrived bright and early at 8:45am to start setting up technical gear and the auditorium itself. After a quick brief – and rather impressive demonstration of the pyrotechnics used during the show – we were ready to go. Whilst the cast were busy in tech-rehearsals and getting a feel for the space (with a ten-piece orchestra behind them, no less), a few or us were able to briefly sit back and marvel at what we’ve all helped to create. From there the whole team were straight into the dress rehearsal, and there’s a buzz starting to build. On the dot of six our audience flooded into the Adelphi Theatre, a few familiar faces included: the lovely Carrie Hope Fletcher (a long-time friend of the Sherman family) stopped by, as did the Phantom himself, Ben Forster. From there, it was all a wonderful blur. The cast did tremendous justice to BUMBLESCRATCH, as did the whole team in ensuring a flawlessly smooth performance. It would be safe to say that we in the Adelphi seats are all well and truly wowed. This has been a special night indeed.

Now – to the after-party.