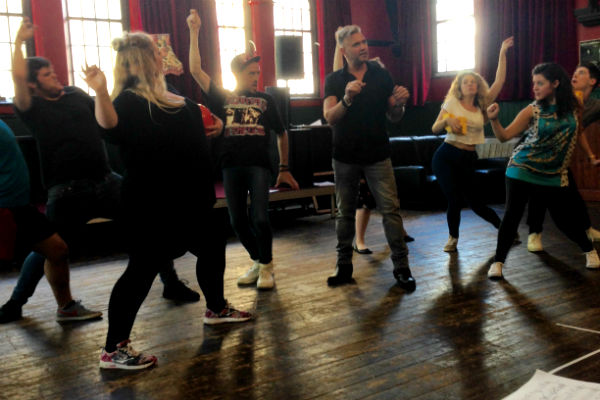 Rehearsals officially began with the full company of BUMBLESCRATCH yesterday (Monday 22 August 2016), but they followed two days of ensemble music calls at the end of last week. Here, Robert J Sherman’s production assistant Thomas Josling gives us a glimpse on the work that’s been taking place to put the show together. Check back for more rehearsal diary updates in the lead-up to opening night on Sunday 4 September…

We’re here on our first day of ensemble music-calls! Our talented group of eight sang through all their numbers in the show with Musical Director Tom Kelly; to say they were in good voice would indeed be something of an understatement. After some deliberation over lyrics (apparently ‘aesop’ is pronounced ‘ee-sop’), we’re almost ready to begin staging.

Today we welcomed our Perry to the rehearsal room at Union Chapel. Young Ilan Galkoff may only be thirteen, but his experience certainly speaks more than his age. Sat at the piano with MD Tom Kelly, we’ve sailed through the numbers. Once you’ve heard his number “Adorable”, there’s no doubt that for him, it’s aptly named (he’ll steal your heart for sure). Meanwhile the ensemble have had their costume-fittings across the building with costume designer Gabriella Slade — for rats, they don’t scrub up too badly!

This morning hosted our first meet-and-greet with the whole cast and crew (and there are a lot of us). After some welcome talks, we were all well and truly baffled by social media guru Terri Paddock in her short session on using Twitter (@Bumblescratch1). Incidentally, our thirteen-year-old Ilan Galkoff – a.k.a “Perry the Plague Rat” in the show – is better versed in the art of ’tweeting’ than the rest of us put together. Things are starting to shape up nicely, staging the opening number “London in the Plague” centred around our “Melbourne” Darren Day (pictured) before a lunch break. The afternoon flew by as we progressed through staging the musical numbers. Not a bad view from the creatives’ desk!

Well the sun is out, and we’re hard at work at Union Chapel (with all the windows open). After a quick vocal warm-up, we got our dancing shoes on to stage the number “At Least a Rat Has Got an Excuse” with the ensemble, Melbourne and Perry. After lunch, the lovely Michael Xavier joined us to set his big introduction “Hookbeard’s Theme”. For The Pirates of Penzance’s “Pirate King”, we have “Hookbeard the Rat Pirate” (eat your heart out Gilbert & Sullivan).