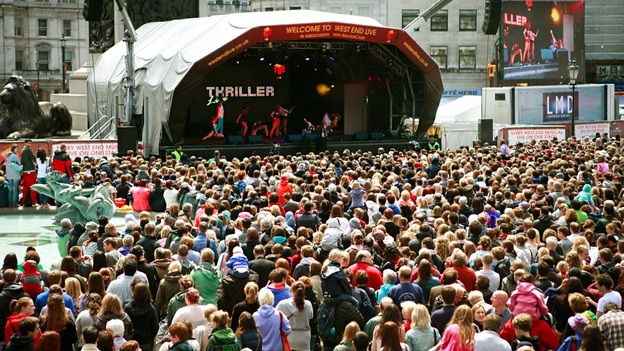 WEST END LIVE is THE date of the summer for musical theatre fans – and, this year, Robert J Sherman’s BUMBLESCRATCH will be part of it, along with our special guest and Bumblescratch alumnus, Game of Thrones’ young Ned Stark, Sebastian Croft.

Now in its 12th year, WEST END LIVE returns to London’s Trafalgar Square next weekend (18-19 June) for two days of free performances from top musicals from the West End and beyond. More than 500,000 people are expected over the course of the weekend for this open-air extravaganza, the largest event of its type in the world.

BUMBLESCRATCH is confirmed to perform 4.45-5.00pm on Saturday 18 June. The performers assembled for WEST END LIVE are NOT the same cast that will perform in the full concert presentation on Sunday 4 September at the West End’s Adelphi Theatre – but they will give you a great sneak-peek of what to expect.

Three Sherman songs from BUMBLESCRATCH will be performed by three amazing stars. For one time only, special guest Sebastian Croft will reprise his performance as young Perry from the 2013 workshop to sing “Bumblescratch Nightmare”.
Greg Castiglioni and Anna Stolli, who both played parrots in Robert J Sherman’s hit Love Birds together last summer, reunite to play plague rats next weekend: respectively, the title character and his nagging fiancée Bethesda.

Castiglioni sings “Music of the Spheres” and Stolli sings the ode to his character, “Melbourne Bumblescratch”.

Be sure to get there early! Although WEST END LIVE is free, space in Trafalgar Square is limited – and the gated entry is subject to security checks. So you need to arrive in plenty of time to guarantee entry.

Who else is at West End Live?

The event is sponsored by MasterCard and organised by Westminster City Council and Official London Theatre with support from the Mayor of London.

For the more information on WEST END LIVE and the full 2016 schedule, visit www.westendlive.co.uk.