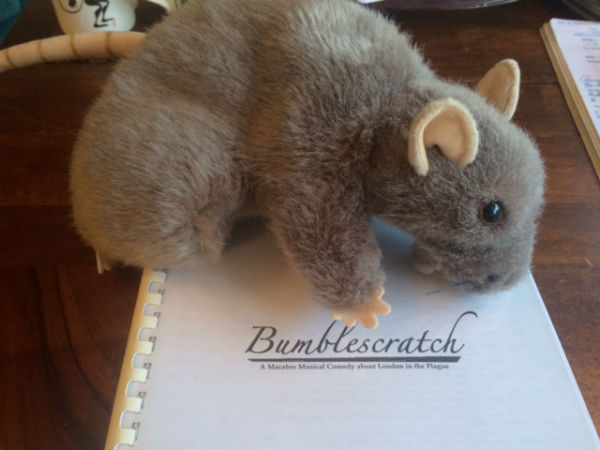 BUMBLESCRATCH‘s Robert J Sherman has launched a series of blogs on his personal website on various aspects of the show’s creation. We’ll be excerpting selected blogs here. Please visit robbiesherman.com to read more from this series in full.

‘Frankly, I can’t stand rats, or mice: they terrify and disgust me. So why write a musical about rats? Shakespeare’s Globe is to blame.

‘I was in the gift shop there after seeing a history play. There, on display, was a prominent rack of plague rat puppets for sale. Now, I love puppets. This puppet display had a sign saying “plague rats”, and I thought that was peculiar.

‘In the States, where I’m from, no one would ever mass promote a rat – and certainly not a “Plague Rat” – and never for children. Not so in this country. Here you have pubs called The Rat and Parrot. An eating establishment called The Rat?! You just wouldn’t see such a thing in America. Something about it amused me. Immediately a name popped into my head: “Perry the Plague Rat” and I thought it was very funny.

‘Though I deal with serious issues in BUMBLESCRATCH, it’s very much a tongue-in-cheek story. I’d seen Les Miserables and wondered: “How could you write anything darker than that?” There was my challenge! So, in part, it’s a sort of homage to Les Mis, but it’s even more miserable: it’s all about the plague and everybody dies…’