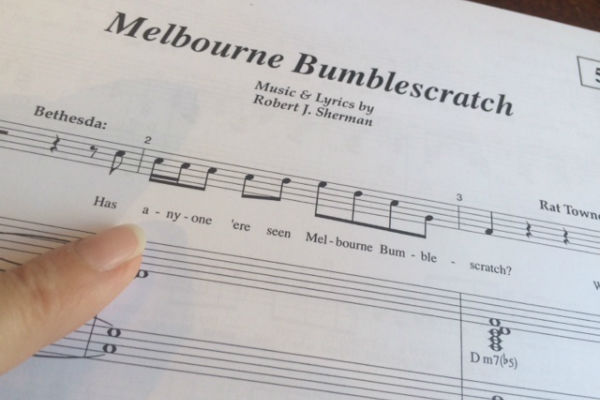 BUMBLESCRATCH is a sung-through musical. Since I was small I knew that I wanted to follow in my father’s, uncle’s and grandfather’s footsteps and write musicals. But one piece of unchartered territory, at least for Shermans, was writing sung-through musicals (or opera). So I made it my goal that I would one day write one! And it’s been a sort of bucket-list challenge for me ever since.

When the subject for BUMBLESCRATCH presented itself to me – a highly dramatic piece starting with the Great Plague, people suffering and dying, and ending with the Great Fire – I thought there was enough dramatic fodder to support continual singing. (It’s hard to write convincing music and lyrics about mundane matters.)

One of the biggest challenges in writing a sung-through piece is creating the segue scenes. In any type of writing, you have to include expositional moments, moments when you explain where you are, what you’re seeing, who the characters are. The trick is: how do you make these exchanges intensely dramatic enough to justify the characters singing about them?

In a sung-through musical or opera, there are two main types of music: the aria – an identifiable song or big number. Then there’s the recitative, which is effectively the dialogue sung. Most modern sung-through pieces will break into dialogue momentarily.

One of the downsides of writing a sung-through piece is that your editing process, which is so critical, is artificially constricted by the variance which the music needs to supply…